These are the final words of Samuel Beckett's 1953 novel The Unnamable. I first read it when I was in my 20s. It is part of a trilogy of novels: Malloy, Mallone and The Unnamable in which Beckett gradually takes the novel to places where it has never been before. With The Unnamable, which is the final book of the trilogy, we have a nameless character who goes nowhere, meets no-one and ruminates endlessly in his chair. (Sound familiar?) Thirty years on and I feel even more affinity with this strange, trapped individual who has nothing left but words. 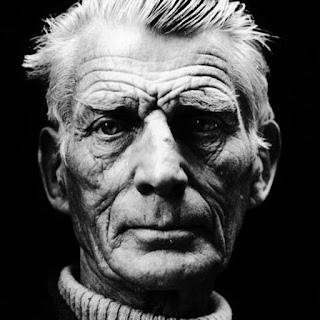 To me, Beckett's work reeks of depression. In fact, one could do a PhD on the link between clinical depression and Beckett's work. He was writing in the post war period - which was certainly an era characterised by economic depression - but the texts of his novels and plays are rife with actual depression: anhedonia, low mood, forgetfulness, brain-fog, hopelessness, thoughts of death, suicidal ideation etal. His characters personify what it is like to be depressed - to be living in an absurdly bleak world - with no hope of redemption. In fact, to me his works are depression - albeit relived by a wicked black humour. Strangely, the bleakest of them is probably Endgame - which IMHO is one of his less successful pieces. In the 1980s, I went to London to watch Max Wall play Krapp's Last Tape and it was hilarious.

The other fascinating thing about Beckett is that, as an artist, it was his avowed intent to reach a point of complete silence. In his work he seems to be moving towards an acknowledgement of the futility of words and thoughts. Almost in a Buddhist kind of way - he seems to be struggling back towards his original mind which is free of thoughts. Ironically, freeing oneself of thoughts is one of the best ways to conquer depression.

I will leave you with a few classic lines from Beckett:

The sun shone, having no alternative, on the nothing new.

VLADIMIR
That's what you think.

Waiting For Godot
Posted by Seawolf at 02:46