The Paradox of Work

With regards to depression - work can be a paradox.  In some cases it can be the cause of the depression; in others the relief from it. In her 2012 book Out of the Blue, the journalist Jan Wong outlined how working as a journalist at The Globe and Mail in Toronto Canada caused her descent into clinical depression. For others like TV gardener Monty Don or the journalist/PR guru Alastair Campbell work is their life-line. 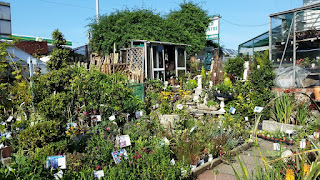 For me, I was in the first category. Work literally killed me. Years of upheaval at the FE college where I worked led to ever increasing anxiety. New principals, ever-changing line managers, redundancy, reorganisations, appraisals and relentless staff development eventually tipped me over the edge. By the summer of 2015 my anxiety had flipped over into clinical depression.

But, the weird thing was that as soon as I resigned in 2017 (after 25 years) I realised that without work I would spiral even quicker into total oblivion. Work  may seem like drudgery or stress but without it life can open up like a enormous void. Days can become extraordinarily long. And if you are already in the void that is depression - then the double void can literally be bottomless. Here is a list of the things that work provides:

In those early days after I resigned, I was in a terrible state. I was still suicidal;   I was horrendously dizzy, leaden and confused and demotivated. Every day was a life and death battle against the negative voices in my head. Sitting at home was exactly what I didn't need. But then going back to the college wasn't an option either; it was completely toxic to my mental health. But what was I to do? How could a person in my state hold down a job? Well, very kindly a friend of the family had offered me some gardening work at £10 per hour. I wasn't sure that I would be able to do it (physically or mentally) but I said yes anyway. The next week I drove out to their old rectory and started working in their wonderful rambling, unkempt garden. I kept going for several weeks - weeding and digging, grubbing out bamboo and ground elder or harvesting comfrey.

Then one day, when I was off, I decided that I needed some bark for the front garden and I popped up to my local garden centre. How I got my head round something as practical as this at that time is an amazement. But I drove the mile up the road and while I was there a lady customer came up to me and asked if  I could put some compost into her car for her. I said that I didn't work there and she apologised. But, when I got home, the incident made me think. If a customer at the garden centre could mistake me for an employee maybe the manager might do the same. After all, by this time I was a time-served, jobbing gardener.

So, a few days later I popped into the garden centre and had a chat with the owner - enquiring if he had any vacancies. I felt certain that I was wasting my time but then to my surprise he said yes and offered me a trial starting the next day. So there I was the next day - sequestered in this tiny oasis off the Norwich ring road - watering perennials at the end of a long yellow hose.

Since then I have worked in two other garden centres and a tree nursery. Three years and I am a reasonably experienced plantsman, hold a forklift truck license and am one of the senior members of the horticultural team. I also scan in plant deliveries on the computer, print out and laminate posters, print out price labels and operate the till. Vestiges of my previous working life have meant that I always turn up on time, listen well and have good customer service skills. Not bad for a virtual zombie.

For me - throwing myself into work has been the only way to go. It has filled my days, given me money and allowed me to meet lots of new people. It has allowed me to feel more normal and to make a contribution. It is also proof, once again, that depression lies. At the start of all this depression was shouting in my ear than I had no future - other than as some kind of nameless, moribund character out of a Samuel Beckett novel.
Posted by Seawolf at 05:08