Research has now shown that by being in nature our brains can create serotonin and dopamine and/or reduce cortisol. Hence nature is good for our mental health. There is a lady I follow on Twitter called Emma Mitchell - who is a fellow depressive - but who has done a lot of work on the efficacy of nature cures. She has written a bestselling book on the subject called The Wild Remedy. 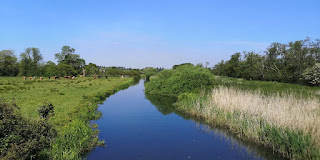 
She also advocates being by water (rivers/sea etc) as another way of boosting our mental health. I've always been instinctively drawn towards rivers. This is a picture of the River Bure at Little Hautbois in Norfolk. I used to go canoeing here and its a place I regularly visit today.

Here is a poem I wrote about another Norfolk river - the Tas - which hopefully shows how mindful moving water can be.

You flow endlessly.
Over you your lights are beautiful—luminous and dark, moving and still, broken and whole.


In summer, columns of light—mottled by leaves.

In winter, the bleak light over farmland, the frosted-grey depth.
Today, in spring, lights dancing in and out of shadow—concealing and revealing.

In your course you are infinitely changing—neither crooked nor straight.
You fit your banks.
Running you are beautiful—slow in the deep pools—vociferous and fast in the shallows.

In private land you are hidden.
In public land you are open.
Beneath bridges you reflect back the faces of watchers
.
In winter, you fill with water and become clouded.
You race between alders, pound through sluices, tumble over fords.
You wear a sullen expression.

In summer, you slow up and become limpid.
You display your weed in long floating trails.
You glitter past grazing cattle.

Then after long concealment your fish  appear—sparkling-sided, melting and merging, vanishing and visible.

There have been many books advocating nature as a cure for mental health. One of the earliest was Nature Cure by Richard Mabey which, despite its title is not really about his cure for clinical depression but about his subsequent move to Norfolk from the Chilterns. Another one with a Norfolk connection is Bird Therapy by Joe Harkness about his use of ornithology to help after he experienced a nervous breakdown in 2013. The book was crowd funded and has since become a best seller. Joe used to be on Twitter too but closed his account after as he found it was not helping his mental health.
Posted by Seawolf at 07:30