If you have major depressive disorder - then sooner or later you'll be recommended medication. Medication is not a panacea and doesn't work for all people. It is reckoned that only 50% of people respond to antidepressants. Medication can also be accompanied by a myriad of side-effects. Furthermore, critics argue that medication does nothing to address the underlying causes of depression. 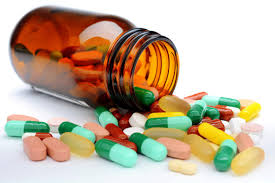 However, medication can open a window for you. It can buy you time. When your brain is on fire - it can be impossible to concentrate on any other therapies or strategies. All you are doing is trying to get through the next minute.

I went through a lot of medication. I was on antidepressants, anti-psychotics, anti-anxieties and anti-inflammatories. Nothing seemed to work for me. I went through endless dosage increases and seemingly endless switches from one type of medication to another. Then after about five years and on the third time of trying I found that Aripiprazole was actually starting to work for me. Without it my days were a blood-bath of negative thoughts. (Ever tried living inside a  hurricane?) With it there was a chance to breathe - a chance to grab a modicum of mindfulness. I'm not saying it was Nirvana, because it wasn't. But it bought me time. It allowed my head to clear somewhat. It enabled me to concentrate more on what I was supposed to be doing - like work or being with my family. I could remember what day of the week it was. It also rekindled the vestiges of my sense of humour.

If, like Matt Haig, you can get by without medication - then great. But if you can't - don't be ashamed to use it. If you were diabetic you would take insulin.

Furthermore, depression doesn't like medication - so that may be another good reason to take it.
Posted by Seawolf at 00:27