I feel sullied and unusual....

Just wanted to break off from the more didactic side of the blog for a moment to do another personal post.  As I've mentioned a few times already anxiety/and depression caused me to become chronically dizzy. Today is Sunday and I'm sitting at home in the back room with the lap-top typing this blog and I'm acutely aware of feeling not OK spatially. While I'm on the sofa and my head is relatively still things are reasonably OK - but as soon I get up or even do anything from a sitting position - then I experience strange sensations. For example, I have a cup of coffee and a Twiz on the table in front of me. Reaching for it immediately sends my faulty gyroscope into a spin. The cup is not quite where I think it should be. It's weight is also unexpected. Similarly when I pick up the Twiz; the packet is sealed and therefore needs opening. Opening a Twiz wrapper shouldn't be rocket science but somehow it is. I can't quite co-ordinate the required hand movements necessary to open it smoothly. I can do it - but the whole exercise feels unnatural and out of kilter - like I'm on a sloping roof or a child's merry-go-round or in a high wind. 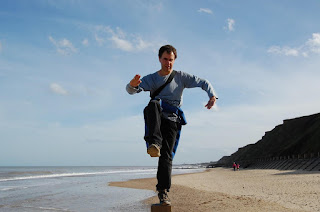 OK, I have now drunk the coffee and eaten the Twiz. I stand up - which always unsettles me. I have two mugs on the table and can't quite pick up both of them with one hand. They slip as I am holding them and I have to re-grasp them. Then there is a side plate with the Twiz wrapper on it. As I stand up it blows off the plate onto the floor. I bend and pick it up - feeling a bit wooshy - and put it back on the plate. I step forward again and it blows off again so I repeat the exercise. These little things craze me. I know this could be normal stuff in action - but my impaired balance/co-ordination just seems to reinforce feelings of hoplessnenes which then kick starts my depression. The problem is that I can't get away from these physical snaffus these days. In fact, I am just like one of those old silent comedians who perpetually have problems with objects. Everything for me is now a bar of soap, a banana skin or a pot of glue. Everything seems to have a mind of its own.

These days - I'm also acutely aware of the transition from sitting still to moving. It's something that previously I would have taken for granted. I appreciate that age may have a part to play in this as getting up is now accompanied by an habitual groan. However, moving or being still was just a natural thing and the alternation between the two was also natural. But not any more. Hey ho.

The picture above was taken at Bacton a couple of years before I became ill. I would have extreme problems doing this now :-).