Over-eating or under-eating is another classic symptom of depression. I know this sounds a bit contradictory - but depression can tip you in either direction - or indeed in both. 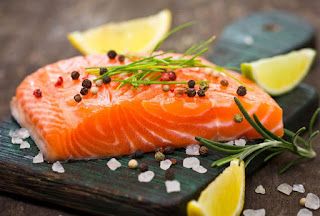 Just as people with depression lose their appetite for life - they can also lose their appetite for food. This may be due to fatigue or lack of motivation or, in some cases, an unconscious attempt to starve themselves to death. This can result in rapid weight loss. I know that when I was first ill, I lost over two stones in about a month . My face became thin and my trousers became baggy. My situation was also complicated, however, by severe constipation and the fear that I wasn't  sure how food was going to pass through me anyway. I remember going to my local favourite curry restaurant one night and not being able to eat even half of my meal.

On the other hand, when depression strikes it can also make us head directly to the kitchen. Food can provide comfort when we're feeling down. A depressed person sitting on the sofa eating ice cream is an actual thing! Clinical depression can leave you feeling flat and demotivated and food may be the only thing that gives you a boost - albeit for a short period of time. After my initial weight loss - I started to crave food to boost my feelings of well-being. I used to crave doughnuts, egg mayonnaise and french bread, ambrosia creamed rice and croissants. As a result my weight started to go back on. The only up-side of this craving was that it made me leave the house to go to Tesco's.

Food may also have a role to play in combating depression. Certain diets are claimed to be effective in fighting the Black Dog. There is, for instance, some evidence that countries with high levels of fish oils (Omega 3) in their diet (like Norway and Sweden for example) may have lower incidences of depression. However, similar claims are made for foods containing antioxidants, or mushrooms, or dark chocolate, or walnuts, or turmeric, or blueberries, or rosemary or chillis. And then there are the herbal remedies/supplements which may (or may not) help depression - such as St John's Wort or Ginkgo Biloba. I would, however, urge you to approach these claims with caution. I have tried a variety of diets and supplements and none have made any difference. (But they may do for you.)
Posted by Seawolf at 11:18