Electroconvulsive Therapy (ECT) is a medical procedure - conducted under general anesthesia whereby a small electric current is passed through the brain. This causes a seizure which can potentially help alleviate symptoms of mental illness - especially severe depression. It all sounds very scary, I know, and when one thinks of ECT one tends to have visions of Jack Nicholson's character in One Flew Over The Cuckoo's Nest. However, ECT is much safer these days and more controlled and doesn't have as many side effects as previously. 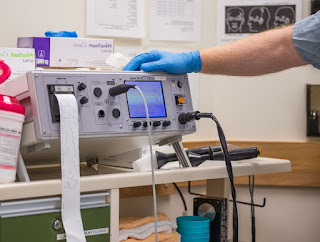 ECT is normally only administered to patients who have treatment resistant depression. It is normally the last port of call after medication and other therapies have failed to work. If you have mild to moderate depression then ECT would not normally be an option.


Severe depression can completely incapacitate some people. In some cases sufferers literally can't move, eat, talk or get out of bed because of it. ECT is normally administered for between 6-12 sessions - two or three times a week. It's also used for dementia sufferers - particularly those who become aggressive and also for treating mania in Bipolar sufferers.

Success rates can be as high as 80%. It's benefits can be short lived though and therefore patients may have to have more than one set of treatments. One of the common side effects of ECT is memory loss.

I have never experienced ECT so can't vouch for it's effectiveness. However, I was very worried that I might have to have it - especially when I was in hospital.  My mother had it and I think it's far to say that it didn't improve her depression. It seems like a pretty invasive procedure - but has a good track record for severe depression.
Posted by Seawolf at 01:28