At the end of her book Out of the Blue Jan Wong writes:

'For me, writing about depression was not therapeutic. It made me relive the worst days again and again. But the creative act of setting down words eventually created a certain distance from the source of despair. Once the record is there, written down in full, I'm finally free to purge this terrible period from my brain. I can now stop ruminating about it, over and over again.'

Ever since I was first ill, I have tried to write about my depression. Writing had always been my raison d'etre. Even when I was in the hellish environment of the psychiatric ward I felt that I wanted to record something - to preserve something. At that stage though - I could barely write my own name - let alone say anything meaningful about anything as mysterious as depression. But all through the long and painful process of my illness I could never quite shake off the feeling that I had to find words for it. I had to somehow identify my opponent - pin it down. 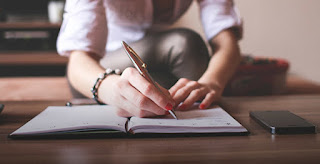 In the early days, this was simply impossible. Like other writers who have developed clinical depression, I found I could no longer write. This was both a physical and a mental issue. During the onset of my illness I actually experienced a stiffening in my hands. I remember waking up each morning with my fingers locked. I'm not sure if this was arthritis or poor circulation or inflammation  but I literally could not operate a pen anymore. But obviously I could still type. Or could I? Depression had also overwhelmed me with dizziness - so when I went to my trusty keyboard - the one I had been using for over ten years - I now felt disorientated and helpless. The spatial disorientation that it brought on meant that I couldn't seem to find the keys anymore. They were not quite where they should have been. Furthermore, the screen seemed to move and distort. This may have been due to the deterioration in my eyesight - which also occurred at that time. In any case, typing was now a real challenge for me.

On top of this, I was also wrestling with a general decline in my cognitive abilities. As depression overcame me, my brain literally fogged up. It was as though the metaphorical fog had percolated in through my ears. I could no longer think straight. My spelling and vocabulary had gone to pot. My sentence construction fell off a cliff. To find words for depression is hard at the best of times - but to do it with a brain that is fogged up like a valley in the Lake District - while simultaneously on fire - is an almost impossible task. I remember that it was about this time that I set up an anonymous Twitter  account - to try and communicate some of my 'shit' but it was just that - a mess of suicidal imaginings  - offering no insight whatsoever. Even in my frantic state I could see that it was bad and deleted it.

Over the next few years I tried over and over again to write about what had happened to me. But, like Jan Wong, it was not therapeutic. Retracing my steps was terribly traumatic. By this stage I had read a few depression memoirs and knew how important it was to share information about the illness and how important it was to know that other people had experienced the hell that you were going through. Deep down, I wanted to use my experience to help other people but, time and again, I kept coming up against the fact that I didn't want to share everything that had happened to me. It was too painful, too personal. The memoir format was not working for me.

But I still had this desire to write about depression. I thought (maybe naively) that if I could just pin it down then I could possibly expunge it. If I could expose all its tricks then I might be able to break it's power over me. I had a lot of information to share and I genuinely hoped that I might be able to spare some people the full hideousness of what had happened to me. So, finally, after about 30 attempts at memoir and half a dozen attempts at self-help manuals - it occurred to me that I could write a blog. In this way I could mix up the factual information with the personal information. I didn't have to plod through the full nightmare of my own story; I could cherry pick.

When I finally started this blog another unexpected thing happened: I noticed that my brain started to  re-engage. I'm not saying that the light came shining through and the fog lifted - but I found that  for the first time in five years my brain was helping rather than hindering. Perhaps it was simply that I had finally found something to say and a way in which to say it?  I also found that my spatial issues with the keyboard lessened. I found that I could type faster than before and that I was making fewer mistakes. Suddenly, the words that had sustained me all my life started to come back. Now I am following them to see where they lead.