The Causes of Depression

Nobody knows for certain why some people develop major depressive disorder - but there are a number of common triggers/risk factors:


Depression may occur when a number of these triggers occur together. Depression, as we know, is a complex illness. 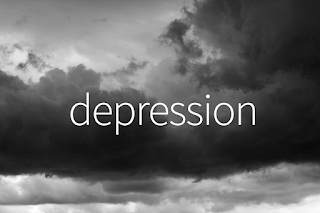 Looking at my own situation - there were a number of factors which I think led to my illness. There was certainly depression in the family. My mother suffered from post natal depression and also received ECT treatment for general depression. My childhood was not a happy one and I don't think I received a lot of love. There was certainly no sense of reassurance that things were going to be OK and I don't think I ever learnt how to self-sooth.

I would describe myself as a pessimistic introvert. I also suffer from social anxiety. This has meant that I've tended to have a small circle of friends. About six months before I became ill I fell out with one of my close friends. This had a devastating impact on my life. It disrupted trips to the pub with two other guys and it also stopped my recreational mountain biking. These two things left me suddenly feeling isolated and lonely.

In the seven years prior to my illness, my work situation had been gradually deteriorating. I worked in a further education college giving financial advice to students and had been there for 25 years. There had been a change of principal and the college entered a period of intense organisational upheaval. In a few short years I was made redundant and had to reapply for my job; I was down-graded in salary terms; my office was removed and we went open plan; I had 4 - 5 different line-managers and I was thrown head first into a new culture of appraisals and constant staff development. As a result I started to get a nervous stomach and began to dread meetings and conferences etc.

Throughout these years, I kept myself going by writing the Literary Norfolk website. This catalogued the literary locations in the county and kept me busy travelling back and forth - photographing and researching. I loved the quiet lanes and the church towers and the unforthcoming rivers. But by 2014, I had finished writing the website and was suddenly at a bit of a loss as to what to do. Writing had always filled my mind. It was both occupation and therapy for me. Suddenly my mind was empty, my social life restricted; my biking curtailed, my work as difficult as ever. By the spring of 2015 I was starting to feel very anxious. I remember that Nicki and I visited Snettisham for a weekend away. I remember feeling very unsettled all weekend. Bizarrely, it was the weekend of the solar eclipse - which just seemed to make things feel even more ominous. Even the spectacular display of knot coming in off The Wash could not distract me from the terrible unease. A month or so later my off-the-scale anxiety suddenly flipped over into clinical depression and my illness began.
Posted by Seawolf at 02:39