I'm conscious that suicide may be the elephant in the room here - so I thought I would say something about it today. Obviously it's a subject that many people would prefer to avoid - but it's important that we talk about it. As I mentioned in my welcome post, depression is one of the biggest killers out there. It's a killer because people cannot bear the pain of severe depression. In fact, the pain can be so intolerable that death begins to look very attractive. It's hard to describe the level of this pain if you haven't experienced it. It's not that depressed people necessarily want to die; they just want the pain of living to end. 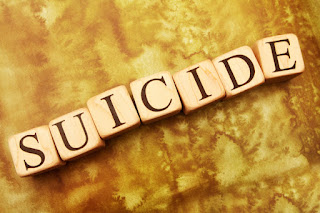 As a result of the pain, depressed people often start to experience suicidal ideation. This is the medical term for the process of thinking about suicide. To start with, this could just be general thoughts about taking ones own life. Most people with severe depression will have thoughts about suicide from time to time. The danger arises when these thoughts start to become more frequent and the depressed person starts to think about an actual plan to end their life. Planning can be the precursor to death.

I've suffered from mild-moderate depression all my life and I can honestly say that I'd never had a single suicidal thought. However, when I became ill in 2015 with clinical depression I was suddenly overwhelmed by thoughts of suicide. It was weird because I remember even the word 'suicide' itself suddenly seemed to be everywhere. Every newspaper I looked at, every news item I watched, every book I read - there it was staring out at me. I remember researching suicide constantly online. Fortunately my plans didn't come to fruition. But I fully understand the urgent nature of the call to kill yourself. That's why depression needs to be identified for the killer that it is. It needs to be de-mystified and it needs to be brought out from the shadows.