Standing Up to the Bully

This morning at work I was completely under the cosh. The bully voice of depression was giving me a good seeing to and, as usual, I was taking all the punches. By mid morning I was battered and bruised and ready to give up. 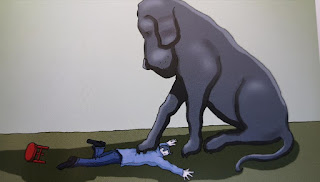 But, then, around midday I had an interesting thought. It suddenly struck me as odd why I let depression talk to me the way I do. I wouldn't expect anyone else to be talk to me like this. At the same time, I also wondered why I was such a bad person - as to deserve being spoken to in this way. What had I done to be attacked and criticised and made to feel guilty in this hideous way? Had I killed someone? Had I robbed a bank? Had I deserted my family? Was I an international terrorist? Yet deep down I still felt like a bad person.

I questioned myself further: where had this sense of being a bad person come from? Where had this acceptance of it as a fact come from? And I realised that there was a tacit acceptance on my part that I was a bad person. I realised that I was complicit in what was going on. I scrolled back through my life and tried to be objective about things. I was reminded of Thomas Hardy's phrase: 'neutral tinted haps and such' but, again, no heinous crimes. So how had I reached the conclusion that I was bad? Had it been instilled when I was a child? If I was bad then obviously I deserved to be beaten up. But what if I wasn't actually bad at all. I suppose this is where low self-esteem comes in or, indeed, it's big brother self-loathing. And I realised that I am extremely self critical. It's almost as though I do it on purpose just to beat myself up. But what if I stopped being self-critical?

Then I had another thought. To face depression every day requires an almost superhuman strength. This continuing battle should be recognised as heroic and difficult. Therefore, I am not a bad person at all but a heroic one. So, when you're under the cosh, remember to congratulate yourself. Say 'no' to the bully.

Email ThisBlogThis!Share to TwitterShare to FacebookShare to Pinterest
Labels: Bully