Exercise releases endorphins which can make you feel better about yourself.  Exercise also has the added advantage of getting you out into nature and nature is another thing that can reduce the effects of depression. However, depression will do whatever it can to prevent you from exercising. 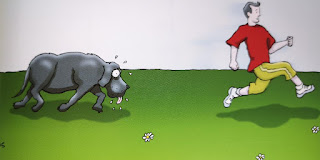 From I Had a Black Dog by Matthew Johnstone


To start with depression makes you feel tired and lethargic - so you will generally be less inclined to want to exercise. It also reduces your motivation. If you're suffering from leaden paralysis, the effort required to exercise will be hugely increased. Even the smallest hill may feel like Mount Everest.

Depression can also play other tricks on you. It can make you agoraphobic or dizzy.

It can also make you feel anxious about joining a gym or self conscious about wearing Lycra, or make you worry that your bike will break down.

If you do manage to get out there, watch out for the negative voice in your head that will try to underplay anything that you do.

'You've only run half a mile or cycled round the block.'

'You used to be able to do the same distance quicker, faster.'

'You shouldn't be this tired after such a short walk.'

Remember also, that depression will reduce any feel good factor that you get from exercising. But try to keep going anyway. If you have severe depression you may actually feel no pleasure from exercise at all. But again, try and continue as the pleasure may return. Remember to congratulate yourself on what you manage to do.

(Well, that's the theory at any rate. I have to own up here and say that since becoming ill five years ago - I have struggled to establish an exercise regime. I used to be a keen walker/hill-walker and a proficient mountain biker. However, depression clobbered me with dizziness and leaden paralysis. I have since climbed three peaks in the Lake Distict and Cadair Idris in Wales - but my body felt like concrete. I could do it - but it felt as though gravity had increased ten-fold. I also found every step disorientating - as though the horizons were out of sync. Here's hoping that fitness will return some day.)

Email ThisBlogThis!Share to TwitterShare to FacebookShare to Pinterest
Labels: Exercise